A 5-year-old girl was referred from her pediatrician for evaluation of right-sided hearing loss. The family also expressed concerns on the overall appearance of the right ear. Other than the hearing loss and the shape of her right ear, she had no other complaints or significant medical history.

A 5-year-old girl was referred from her pediatrician for evaluation of right-sided hearing loss. The family also expressed concerns on the overall appearance of the right ear. Other than the hearing loss and the shape of her right ear, she had no other complaints or significant medical history. She had met all of her developmental milestones and would soon start kindergarten. Her parents were concerned about teasing once she started school. They were seeking both a cosmetic and a functional solution. She had been wearing a soft-band bone-anchored hearing aid (BAHA) hearing aid since she was an infant.

On examination, the left ear was normal with an aerated middle ear space. The right pinna was uniformly small, but all subunits were present. A very short blind-ended pouch was the only rudiment of an external auditory canal (EAC). A repeat audiogram revealed normal hearing in the left ear and a maximum conductive hearing loss in the right ear. Balance function was normal. There was no facial asymmetry. The palate was intact and elevated symmetrically. She had a class I occlusal pattern without evidence of retrognathia or micrognathia.

Aural atresia affects 1 to 17 per 10,000 births. Males are twice as likely to be affected as females. Unilateral atresia is three times more common than bilateral atresia, with the unilateral atresias occuring more commonly on the right. A craniofacial syndrome is identified in approximately 50% of the children with aural atresia. Common syndromes include Crouzon, Alpert, Pfeiffer, Klippel-Feil, branchio-oto-renal, 18q deletron syndrome, hemifacial microsomia, Treacher Collin, and Nager. Children with dysmorphisms should be referred for evaluation by a craniofacial team that includes clinicians from dentistry, plastic surgery, otolaryngology, speech-language pathology, audiology, clinical genetics, and ophthalmology. These children are also at risk of developmental anomalies of their cardiovascular and renal systems, and referrals to cardiology/urology/nephrology should be implemented as indicated by history and physical exam.

In 1992, Jahrsdoerfer et al developed a 10-point grading system to determine surgical candidacy based on key features from the computed tomography (CT) scan and appearance of the external ear. A score of 8 or above in experienced hands is associated with postoperative speech reception thresholds of less than 30 dB HL in 80% of cases. Traditionally, patients with a Jarhsdoerfer score of 6 or less were counseled against having atresia repair due to the low likelihood of success and higher risks of complications (e.g., facial nerve injury).

The following is a summary of this 10-point grading system:

It is possible for a canal cholesteatoma (epithelial inclusion cyst) to develop in a stenotic EAC. Canal cholesteatomas may be suspected clinically when squamous debris is found in the ear canal remnant, and these are identified radiographically as widening of the EAC. These commonly occur in cases with minor aplasia with small EACs (< 4mm). A canal cholesteatoma in the setting of aural atresia is a surgically managed disease.

An audiologic assessment is necessary in children affected by aural atresia. If bilateral atresia is present, a masking dilemma will exist that requires particularly skilled audiologic assessment and techniques to determine ear-specific hearing levels. As reflected in the case study, aural atresia is most commonly associated with a maximal conductive hearing loss in the affected ear. In cases of unilateral atresia, audiometric evaluation of the opposite ear is important in the rehabilitative planning and overall management of the child.

CT of the temporal bone is necessary for preoperative planning. ► Fig. 3.1 demonstrates the differences between well-developed temporal bones that are amenable to successful atresia repair and those temporal bones in which the middle ear and associated structures are poorly developed and typically lead to poor hearing outcomes. Although imaging studies may be obtained at any time before the surgical repair, it may be preferable to obtain scans closer to the surgical timeframe to avoid radiation exposure during infancy or early childhood periods and also to potentially avoid the need for repeat updated scans.

Fig. 3.1 Bone window, coronal CT images of the left ear from two different patients. (a) A poorly pneumatised temporal bone with a low-hanging tegmen (dura) as indicated by the arrow. Such anatomic challenges make successful atresia repair extremely unlikely. (b) In contrast, the arrow indicates a well-pneumatized temporal bone with sufficient space to create a widely patent ear canal and a mobile ossicular chain that would allow for excellent hearing outcomes.

Surgical repair is partly dependent upon the type of reconstruction technique used for the microtia repair. Both techniques are discussed in further detail below. Briefly, in Nagata’s technique, the children are often appropriate candidates when the child is 7 or 8 years of age. Measurement of the size of the head and the chest wall (i.e., rib size) often dictates when there is sufficient autologous tissue for grafting and reconstruction. In the Brent method, children can typically start slightly earlier (5 to 6 years of age).

Adequate auditory stimulation should be provided to an infant as soon as reasonable. In cases of bilateral atresia, this can be accomplished with bone conduction hearing aids when the child is 4 to 6 months old. Whereas soft-band bone-anchored hearing aids (BAHAs) can be placed in the first couple months of life, implantable BAHAs are FDA approved at age 5 or older.

For candidates with poor Jahrsdoerfer scores, bone conduction hearing aids or BAHAs can provide serviceable hearing. It is ideal to provide binaural hearing in children for hearing in noisy environments and to provide directionality of sound for localization.

Parental counseling for congenital aural atresia repair should be included properly by reviewing expectations, operative risks, and postoperative care. Common discussion points include (but are not limited to) long-term care of the ear/mastoid, potential risks of facial nerve injury, potential risk of inner ear damage, potential damage to the temporomandibular joint, and the potential need for revision surgery (canal restenosis, graft lateralization, and chronic otitis externa).

Once deemed a suitable candidate for aural atresia repair, surgery involves creating an auditory canal, removing the atretic plate, mobilizing or reconstructing the sound-conducting mechanism, creating a new external auditory meatus, and lining the newly created canal with a split-thickness skin graft. The canal is generally centered over the ossicular mass and bounded anteriorly by the temporomandibular joint, superiorly by the tegmen, and posteriorly by the mastoid air cell system (► Fig. 3.2). Entrance to the middle ear space occurs in the epitympanum to protect the ossicles and prevent inadvertent injury to the inner ear. Although facial nerve monitoring is routinely employed, vigilance for an aberrant facial nerve is mandatory. 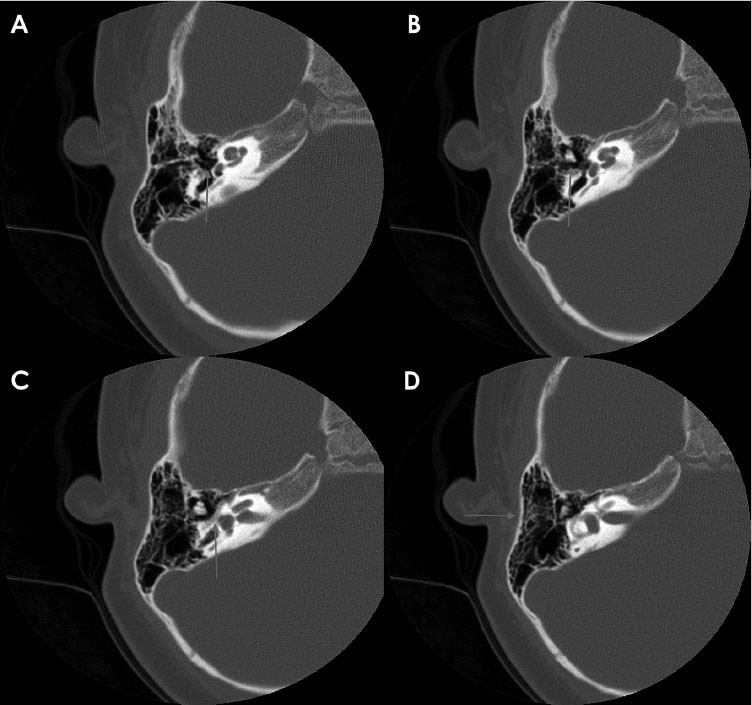 Fig. 3.2 Axial bone window CT images from a child with a right congenital aural atresia. All the panels demonstrate the robust aeration and development of the mastoid and middle ear cleft. (a) The arrow points toward the stapes that is critical for good hearing outcomes. (b) The arrow indicates the fused incus-malleus complex. (c) The arrow indicates the horizontal facial nerve. (d) The arrow highlights the general area in which creation of the ear canal would allow access to the ossicles for successful atresia repair.

A 30% revision rate is seen with long-term follow-up. The EAC has a tendency to restenosis over time. This may encroach on the tympanic membrane and interfere with hearing thresholds as well.

Microtia repair is classically performed before construction of the EAC, but this is not uniformly accepted. It is best to approach this issue of timing of each repair with the family and the surgeons performing each part of the procedure. There are two commonly described methods: Brent (1974) and Nagata (1985).

There are four stages of microtia repair according to Brent:

There are two stages of microtia repair according to Nagata:

Continued aural rehabilitation is essential for all hearing-impaired children. Regular otologic examinations should be performed along with repeat audiologic testing. In addition, some patients may benefit from speech therapy.